Putting on the one piece of clothing that you wear every day all day may not seem like rocket science. However, many women have absolutely no idea that the way they’re putting their bra on is actually the wrong way, and can be damaging the fabric. Stretching the band unnecessarily and excessively can decrease the longevity of your bras. Since they are such a crucial element to your comfort, you definitely want to be treating and wearing them correctly. Here is everything you need to know to putting on a bra, the right way.

The Wrong Way
The majority of women put their bras on the wrong way. The most common way is when you clasp your bras in the front and then swivel it around your body, pulling the straps on at the end. While this may seem like the most convenient way to putting on your most-needed undergarment, it can tug at the fabric in ways that it shouldn’t be pulled. It can also stretch the straps, making them fall off your shoulders even on the shortest setting; the setting that was once fitting.

The Worst Way
The absolute worst way to put on a bra, and the best way to devour the fit and fabric is to clip your bra together while it isn’t on your body. Then, pulling it over your head and shoulders before nestling it over your breasts, just as you would with a sports bra. This is one surefire way to stretch out your bras in all the ways you don’t want to and should definitely be avoided. 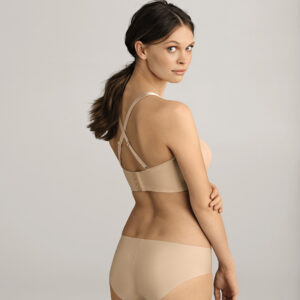 The proper way to putting on a bra is to put your arms through the straps. Place the bra on your breasts, reach around the back and clasp the band together. You’ve seen it in movies and even on lingerie models as you skipping through your favorite magazine. However, many women still don’t put their bra on this way. It’s an odd movement, and getting those clasps together without looking can seem impossible.

Tricks of the Trade
If you’re determined to put your bra on properly and sexier, then there are some tips you can use. Since you’re basically clasping the bra blindfolded, you may want to start by using some mirrors to help you get the motion down. Once it becomes natural, you should be able to clip it all together in seconds, without having to look. You may also want to start by simply practicing with the closest size option.

Some people can’t hook their bra up in the back, whether it’s a lack of flexibility or dexterity. In this case, you can clasp your bra together in the front. However, they can still wear out faster. You want to also put your arms through the straps one at a time. Doing both arms at the same time will pull your bras in all the way that they shouldn’t be stretched. However, it is highly recommended to continue practicing the back clasp as much as you can. Putting your bra on the right way allows your breasts to be placed naturally and properly into the cups, which will enhance the shape and comfort that you experience.