The World-Changing Technology of Spacer Bras

Allow us to change your world and fashionable comfort instantly by introducing you to a new bra technology that is literally taking the industry by a storm. It’s all about the spacer bras, which are basically the BMW version of t-shirt bras. They’re better, enhanced, and have a new design technology incorporated into the craftsmanship called “air pocket technology” that is the most important element of all. Here is exactly why spacer bras are the talk of the industry that everyone can’t wait to get their hands on – and breasts in.
What Inspired the Spacer Bras
Most women can’t wait to get out of their bra by days end, but this shouldn’t be the case – and it no longer is thanks to spacer bras. The main issue with other bra styles is that many of them are made of fabrics that simply aren’t breathable. They cause you to sweat, become irritated and are way too confining. On the contrary, you may prefer lightweight bras but generally, they don’t offer the support that every lady needs because you need the extra fabric, underwire, padding and additional components to keep you held up. Immediately, the lightweight components are eliminated. These common problems associated with bras are essentially what inspired the creation of spacer bras.

The Spacer Bra Creation
For the creation of the spacer bra, all of the common problems experienced with many bra styles were taken into consideration. The first attempt was to incorporate mesh fabric to the design to create a breathable product that decreases friction, discomfort, irritation and so much more. Despite the new bra design bringing an abundance of value to the breasts of women all around the world, there were some concerns expressed by conservative women as they felt the sheer bra was too revealing. So, the spacer bra was put back on the drawing board. 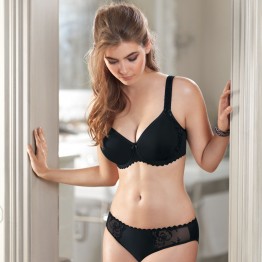 The Advanced Technology
With even more careful consideration put into the design of the spacer bra, the technology of the craftsmanship became much more advanced than anything you’ve ever seen in a bra before. Spacer bras are now created with a dual-layer mesh fabric that is folded over three times in every which way, and sewn together precisely. This instantly gets rid of the ‘too revealing’ concern that some women had with previous designs. This is also what causes the air pockets, which are essentially what allows the bra to feel weightless and makes it even more breathable. As for the fabric used, it was designed to feel like a flexible foam, or what is often described as feeling like nothing at all; like you’re literally wearing nothing at all. It’s heaven under your shirt. The final touch added into the design of the spacer bra technology was the soft fabric that is placed on both sides to enhance the comfort of the bra even more.

Due to the unique craftsmanship and advanced technology incorporated into spacer bras, proper circulation is emphasized, which prevents moisture from accumulating under the bra, which can create boob sweat and discomfort. The stitching is also so precise that the spacer bra doesn’t require an abundance of TLC to keep its supportive shape. An added benefit to that is that they’re extremely easy to wash and even easier to wear. So there is no reason why you should be dreading having to wear a bra ever again. The spacer bra technology has taken care of those common problems and concerns and created a flawless design that your breasts will fall in love with.